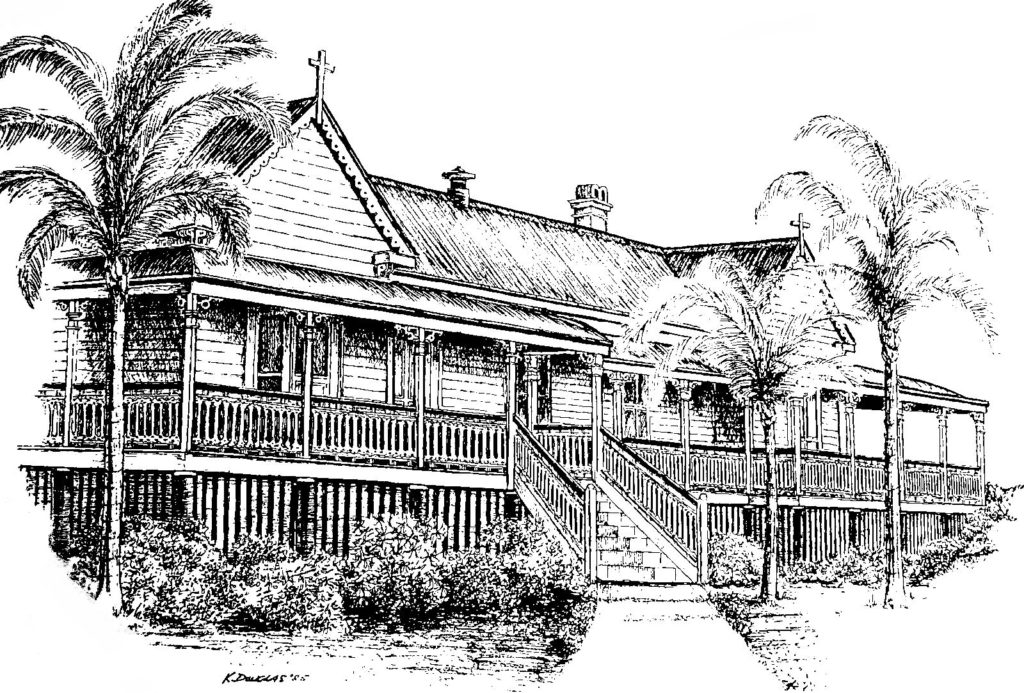 The first temporary church in Yeronga resided in an old, timber Queenslander and was named Kadumba House. It was blessed and opened on April 19, 1925.

In 1937, a brick “Church School” building was opened by Archbishop Duhig, with St Sebastian’s Church on the top level and St Sebastian’s School on the bottom. The first Parish Priest was Fr Owen Steele (later Monsignor, who was a life member of the Rats of Tobruk and founder of Beaudesert’s BoysTown). He remained in Yeronga parish until 1939. More history about St Sebastian’s Catholic Primary School can be read at http://www.stsebastiansyeronga.qld.edu.au/school-profile/Pages/School-History.aspx

With further growth in the area, a second parish church was built in Yeerongpilly. Archbishop Sir James Duhig blessed the foundation stone at St Fabian’s El Alamein Memorial Church on 6th December 1964.  It was dedicated to the servicemen buried in the El Alamein War Cemetery, Egypt.  Archbishop Patrick O’Donnell blessed and opened the church on 23rd May 1965.  St Fabian’s was the first church to be built in the Archdiocese to conform to new liturgical requirements so that the priest faced the people.

To commemorate the 70th Anniversary of the Battle of El Alamein in 2012, the parish fundraised and commissioned two stained-glass windows above the main altar to depict the parish namesake saints of Sebastian and Fabian, together with aspects of the El Alamein conflict in World War II incorporating an Australian War Memorial photograph of Fr Byrne conducting a service at El Alamein.

Father Peter Conroy, together with the support of the Parish Interest Group and parishioners, had long been interested in having artistic stained glass windows to enhance the aesthetics of the church. It was envisaged to have images of St Fabian, the Patron saint of this church and St Sebastian, the Patron saint of the Parish and its Primary School, forming the central focus of each window. Also as St Fabian’s is an El Alamein Memorial Church it was fitting that the 70th anniversary of this major World War II conflict could be commemorated by the commissioning of two stained glass windows featuring depictions of St Fabian, St Sebastian and the Battle of El Alamein.

Stained Glass Artists, Gerry Cummins and Jill Stehn, were commissioned to design, manufacture and install two stained glass windows.  They were invaluable in providing their professional advice and direction so that the three seemingly disparate elements of St Fabian, St Sebastian and the Battle of El Alamein were combined into a meaningful and aesthetically integrated composition to suit the style of the sanctuary and the church.  The unifying theme of the windows is that of “sacrifice” or “dying for a cause which is greater than oneself”. The idea of sacrifice applies equally to St Fabian, who while he was Pope, was martyred by the roman emperor and to St Sebastian a soldier, who was also martyred for his beliefs and for those Australians who died during the two battles of El Alamein which were a significant turning point of the war.

In the windows St Sebastian has some arrows flying past him as he was pierced by many arrows from which he did not die.  His expression is of a great sadness that people believe that differences of opinion and belief can be resolved through violence.

St Fabian is wearing a Roman farmer’s felt hat with a papal tiara “waiting” behind him.  He has a farmer’s sickle in his hand which is similar in shape to the crozier, also “waiting” behind him.  He is standing with his arms folded, in a gesture of disinterest.  Three rays of golden light from the white dove of the Holy Spirit above his head descend into the part of the window occupied by St Fabian.

Two of the beams are touching St Fabian’s head.  His eyes are just beginning to move towards these beams as he begins to realise that “something is happening”.  The third beam is illuminating the papal tiara and crosier which are on the empty bench behind him, awaiting the election of the next pope.

St Fabian went to Rome as a simple farmer only to find himself elected as Pope.  The metaphor for us is that our lives can be transformed by the unexpected arrival of the Holy Spirit in our lives at any time.

The whole of the remainder of both windows is devoted to the El Alamein Memorial. It is divided into four sections. The four El Alamein panels are more detailed than the two portraits and provide a means to link together both windows on either side of the sanctuary. In order to further unite the composition and to provide a uniting symbol for the three themes of the two saints and the El Alamein conflict, there is a symbolic dawn sky which represents a new dawn and a new hope.

In the bottom left of the St Fabian window is a scene depicting Father Denis Byrne with three soldiers conducting a burial in the El Alamein desert.  This scene was reproduced from a photo, which was taken on 18 July 1942 and is now in the Australian War Memorial in Canberra, of Father Byrne, with some Australian soldiers, conducting a burial service for an Italian prisoner of war, a Australian soldier and a German.  One radiating beam is focused directly on to Father Denis Byrne.

Father Denis Byrne was Parish Priest at Yeronga from 1939 to 1941 when he then joined the A.I.F. serving as Chaplain to the Ninth Division, Royal Australian Engineers. This unit was involved at El Alamein. After the war and on leaving the A.I.F., Father Byrne returned to Yeronga as Parish Priest from 1952 to 1977.  It was Father Byrne who had the church at Yeerongpilly built and named the St Fabian’s El Alamein War Memorial Church as a memorial to those who fought and died in the battles at El Alamein.  Father Byrne was also one of the founders of the El Alamein war cemetery in Egypt.  A copy of the photograph of this El Alamein burial scene is now located at the entry of St Fabian’s church.

The windows are completed to a very high aesthetic standard.  They are fully painted and stained. The highest quality mouth blown and machine antique glasses, along with the best quality kiln fired glass paints, stains and enamels were used.